There are a few ideas about cannabis that seem to persist no matter how much more we learn about the plant. One of them is definitely the belief that cannabis flower burning to “white ash”, is an indicator of quality. Some people believe burning white ash indicates it was grown under ideal conditions. Otherwise good bud. However, that doesn’t stop it from being passed on and discussed by generation after generation of cannabis lovers. So where does this line of thought come from? How do we know whether it’s true? Is there something about bud that burns to white that makes it better than bud that burns to black?

Believe it or not, this debate rages on on social media. A cursory glance shows that people tend to fall into three camps: those who felt a growing step called “flushing” was the cause of white ash and a sign of good bud, those who felt white ash was a measure of moisture in the bud (too moist bud = black ash), and those who were critical of the entire premise. Believers site everything from charcoal to campfires as a reference point for believing this, and site that if your ash burns black or grey, it means that the plant was overfed with fertilizers or treated heavily with chemicals. So what is the truth?

As it turns out, the color of the ash is more about the temperature at which it was burned rather than the quality of the bud itself. Science has studied this question for years, but has used tobacco to study the meaning of different types of ash. Ash is a complex combination of minerals, charcoal and char, and interestingly, can give big clues on many different aspects concerning fire and fire-related events. It is often investigated in the case of wildfires to get an insight into the burning temperature. When the temperature of combustion is high, burnt organic material and nitrogen concentrations lower, leading to a clearer ash color, somewhere between grey and white. When ashes reach their clearest color, they’re composed mostly of crystalline or amorphous inorganic compounds.

When the temperature of combustion is below 450° C, the combustion process is considered incomplete, and when this happens, the ash remains full of organic compounds, including carbon, hence the darker color. When we take the temperature higher, over 450 degrees, this carbon is volatilized, turning into a gas and leaving mineral ash behind, made of calcium, sodium, potassium, magnesium, silicon and phosphorus in the form of inorganic carbonates. Simply put, this translates into lighter-colored ash. All this leads us to the conclusion that no, light-colored or white ash isn’t an indicator of your cannabis’ buds quality, but of the temperature at which the product is being combusted.

While there is some divide over what white ash signifies, there is pretty wide consensus around the importance of a weed grower’s common practice called “flushing. Hydroponic indoor growers “flush” the plant for the last 10 days before harvest by only feeding it water, instead of a nutrient mix, in a sort of water fast that forces any stored nutrients to be used up by the plant. It also pushes the plant to ripen. The science on flushing is pretty thin, with Dr. Robert Flannery (Dr. Robb), an expert in cannabis biology, saying, “There isn’t much research that supports this concept,” and pointed to a Master’s Thesis which found flushing “to be ineffective in removing any significant amount of nutrient from the bud.” Some growers swear by the importance of flushing, but others insist that their flowers don’t need anything.

So after all this, you’re probably wondering whether white ash vs. black ash even matters. Well the bottom line really comes down to if you like the smell, taste, and the high—?not the ash, it seems. White ash on its own is an insufficient proxy for quality; there’s too many other factors at play. (I mean, cigarettes burn pure white, and no one’s Instagramming those or having drawn out debates about their quality). So if it burns white and you like it—great! If it doesn’t—that can be OK, too. 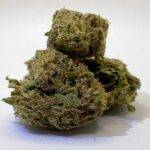