Smoking weed is not legal on any federally owned lands.

Can you smoke weed in public places in DC?

This is where the fun begins. This is a strong disclaimer. I DO NOT suggest smoking weed in public anywhere in the city. However, if you drive through most areas of the city on a beautiful day you may easily smell sweet cannabis being burned. Where you can smoke weed in DC depends on your activities and where you are headed. Can you smoke weed walking down the street in Washington DC? The technical answer is no. However, with vape pens and one-hitters it is quite easy to do so discreetly.

You may see someone walking down the street with a joint or blunt smoking. Well it is recreational legal and police are not harassing people for cannabis. There is something called common sense though. If there is a day-care group of toddlers walking down the street and you are Puff the Magic Dragon walking along them an officer may deal with your blatant disregard. Nor would I be at an outside table eating at a restaurant and start lighting up curbside. Use situational awareness if you are going to publicly consume.

Can I smoke weed in my DC hotel room?

Well technically the answer is NO. If you get caught you might end up getting a $250 smoke fee charged to your credit card on file. So after a few rounds of trial and error, I figured out some approaches. I can now tell you what I did to maintain my smoke routine without getting caught by hotel security and getting kicked out of room.

1. You have to let go of the joints. I quickly learned to switch to a pipe or a flower friendly vape if I wanted to have any hope of peace.

2. Stay in the bathroom and smoke! Don’t openly smoke weed in the room. You’re just asking to get caught by “Karen” walking by your room. Edibles are the only way to avoid the stink of weed completely. The hotel manager himself suggested this to me off the record. I can’t do too many edibles. The high is just different and I’m one of those people. The aroma that comes along with grinding, rolling, burning, and exhaling is too conspicuous. That’s some shit you have to do outside, so either take it out of the hotel or don’t do it at all

3. find something to neutralize the odor. I had to upgrade my air freshener. Febreze if you didn’t know, is code for stoner activity for the average hotel manager. Most stoners just spray it everywhere. It mixes with the existing scent, then it becomes obvious. Upgrade to a diffuser and clean burning soy candles like Cannabolish. Throw in some Volcano room spray for a fresh floral scent.

Driving around in your car and smoking weed in DC?

Lastly, be aware that it is not legal to consume cannabis while operating a vehicle. Again it is not wide to have cannabis on you and have smoke pouring out of your car windows riding through the city. Some do not realize this extends to water vehicles as well. many rent kayaks, paddle boats, or launch the personal crafts into DC waterways; while I would never condone doing so, be mindful it is illegal to consume while operating and chilling on your water vehicle as well. 420 safely my friends!

A little Night life may be on you all’s agenda when exploring places to Smoke weed in DC. The Adam’s Morgan U Street area may be a destination for you all to enjoy. First things first though; you need your 420 supplies. Maybe you want to grab some Island Sweet Skunk and some Birthday Cake resin carts from Select Co-Op. Again, I do not promote smoking outside in Washington DC.

However, smoking in Adams Morgan is a frequent occurrence as your eyes and nose will reveal. A few spots that will remain nameless may allow you to toke up inside their establishment as well. I for one have never ever done that as I somehow write this with my fingers crossed.

Have you ever been to a rooftop bar? There are more than a few located in the city. Find the one that caters to your niche crowd. My favorite spot, which shall remain nameless, allows folks to toke up in the night sky overlooking what seems like every area of the city. Plan your DC smoking experience accordingly

So, you are in the city visiting or this is your stomping grounds or you’re wondering about the DC nightclubs you can smoke weed in. Either way you want to know where you can smoke weed and enjoy the nightlife. We all have our cultural milieus and mine is a middle-aged hip-hop head. If you want a rock bar, I can’t help you. There are a few spots I can recommend to toke and hang in peace.

Top 420 friendly bars in Washington DC to smoke weed in

I have never been about the Biggie, Jay-Z, or Nas debate. To me that is simply a New York debate about who they like in the 90s and early 2000s. I did appreciate walking into Abigail a few weeks ago and seeing Nas puffing on his select choice greenery. Abigail is a spot in NW DC near Dupont Circle. Yes, you may puff in peace in the establishment that’s why it’s part of this list duh!

I was at Barcode, and it one of the best nightclubs to smoke weed in DC at, but it was a few weeks ago and a huge crew of men and women were kicking it. It made me think of Dave Chappelle’s skit, “when keeping it real goes wrong”. I watch a lot of MMA and recognized a few of the crew. I will keep his name out my mouth as I do not want that smoke whatsoever.

I am simply pointing out that you will see all kinds of celebrities at these Top 5 Nightclubs To Smoke Weed. Don’t start none and there wont be none! 1942 is also a good spot to hit as well. Just be aware you can smoke but only on the back deck. The deck area is still one of the places to smoke in dc also to socialize and kick it. So, as you secure your 4:20 needs in DC, plan to hang out some! 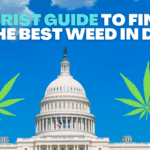