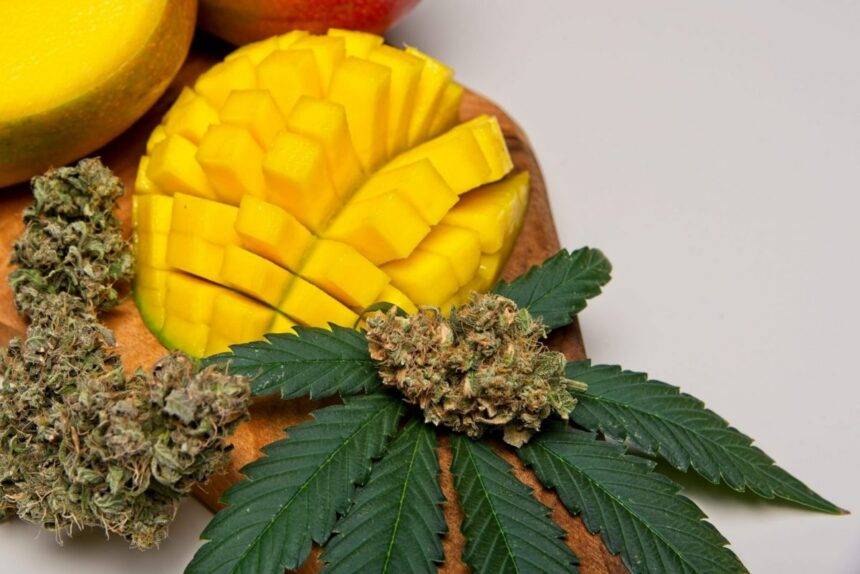 I’ve you’ve ever been blown away by the skunky odor of a fresh batch of flower, you are familiar with terpenes. Terpenes are the aromatic oils that add to the sensory experience of cannabis, imparting memorable and distinctive scents, flavors, and colors on the user. However, while terpenes have long been known for their tell-tale pungent scent wafting through a hidden Ziplock bag (you know, the one that made your mom yell for hours the first time she found it), only recently have scientists discovered that manipulating terpenes could actually modify the plant’s effects. More than 200 terpenes exist, but only a few occur in large enough concentrations for medical use. Among those, myrcene is the most common and potent.

Myrcene, which is also known as alpha myrcene and beta myrcene, gives flower the spicy, earthy, musky scent that is common in strains with a mildly sweet flavor profile. Although it expresses itself boldly in cannabis, it is also common in aromatic plants and herbs like basil, lemongrass, eucalyptus, and ylang-ylang, which are commonly used in perfumes and fragrances. It is also present in fruit and mangoes, and commonly used in brewing beer production, including hops, which gives beer its bitter flavor and scent.

If you’ve ever smoked a potent strain of indica and felt relaxed to the point of sedation, myrcene is probably to blame. It is known for its muscle relaxant properties and is known to calm body and mind to the point of inertia, the feeling of deep relaxation so common in indica dominant strains. Myrcene represents over 20 per cent of the terpene profile in most modern commercial strains, which means that any strains you pick up off the shelf today is likely to have a high concentration of myrcene. It is frequently suggested that you can guess the likelihood of couchlock when consuming a cannabis strain by knowing its myrcene levels. The rule of thumb is that if a strain is more than 0.5 % by weight, it will produce indica effects, while strains with less than 0.5% produce sativa effects, but the truth is that indicas, sativas, and hybrids can all produce similar effects, regardless of levels of the terpene.

Myrcene is highly flexible in its medicinal applications. It can be used to boost the flavors and effects of edibles, concentrates, and flower, but it can also be isolated and extracted for use as a non-psychoactive alternative. As such, myrcene levels vary widely from strain to strain, and each grower can cultivate a bespoke level of terpenes in each strain. It is ideal for use as treatment for sleep disorders like insomnia. The compound has analgesic, or pain relieving, properties and slows the rate of mutation, making it an ideal treatment for diseases as versatile as insomnia to cancer. It also acts as a powerful pain reliever, eliminating the discomfort associated with a variety of ailments.

Myrcene levels vary significantly from strain to strain, but is heavily present in indica- dominant strains, like pure Kush for pain and insomnia. Although, it’s not limited to nighttime, pre- bedtime use. Blue Dream, a daytime strain for symptom relief without heavy sedative effects, and Granddaddy Purple, a strain known for treating stress, pain, and insomnia are both heavy in myrcene. As for research, the biggest question to answer for myrcene is how much is needed to achieve an efficacious benefit. Much still remains to be discovered as scientists research the analgesic and healing properties of the minor cannabinoids and terpenes in cannabis.