Of all of the cannabinoids in the cannabis plant, THC is by far the star. However, of the derivative compounds of THC, THCV is attracting a lot more attention as medical science further researches the cannabis plant. Tetrahydrocannabivarin, or THCV, is a compound that is present in some, but not all strains of cannabis plant. It’s easiest to discuss THCV in context of how it relates to THC. Despite its similarity in name and chemical makeup to the psychoactive compound, THCV has a different chemical makeup and active qualities. While THC contains 5 carbon atoms, THCV has 3 carbon atoms, which doesn’t sound like a lot, but actually makes a big difference each compound’s effects on the body, as well as how the body metabolizes and uses them. The two compounds also have different points of combustion: THC at a 311°F/ 155°C, and THCV at 428°F/220 °C.

Both compounds have strong anti-inflammatory and analgesic properties, and can be used to treat pain. The key difference lies in how the effect each has on the body. THC enhances appetite and is strongly psychoactive, producing the “high” that springs to mind when most people think of weed. However, THCV is less psychoactive, and even thought to act as a counterbalance to the high produced by THC.

They both have opposite effects on appetite. THC enhances appetite and is known for causing the munchies, while THCV suppresses appetite, dulling hunger pains and ultimately helping with weight loss by blocking the receptor that triggers the hunger hormone. THCV is also thought to increase energy expenditure (read, burn more calories), which may increase effectiveness of dietary choices and exercise, if that’s your thing. THCV is also thought to regulate the symptoms of gluten intolerance, which affects about 6% of the global population. Such symptoms include headaches, constipation and diarrhea, excessive bloating, moodiness, and brain fog. THCV has also shown early promise as a treatment for diabetes, as it can regulate glucose tolerance levels and insulin levels, and stabilize blood sugar levels, making it a potential new therapeutic agent in glycemic control in subjects with Type 2 diabetes.

THCV seems to be effective in regulating emotion, and has strong regenerative properties for the brain, muscle, and bone. It is thought to manage or even block panic attacks, making it highly effective in the management of PTSD and other anxiety disorders. What’s more, it seems to only to regulate panic, and not to suppress natural emotions, which some have found to be a side effect of antidepressants. The compound binds to the body’s endocannabinoid receptors to protect and regenerate muscle and stimulate growth. THCV is thought to reduce muscle tremors by binding with the body’s CB1 and CB2 receptors of the body’s endocannabinoid system, which means it can reduce tremors associated with Parkinson’s disease, ALS, or Alzheimer’s and has been shown to reduce lesions that occur in the later stages of Alzheimer’s. It is thought to reduce both the frequency and severity of seizures. It can be taken preventatively or even administered during a seizure. It binds to some cannabinoid receptors in the body’s system to slow or prevent some forms of bone degeneration, making it a potential treatment to osteoporosis, osteoarthritis, and other degenerative bone diseases.

If you’re looking for a high-THCV strain to try, you should know that most strains only contain trace amounts, but obviously the landscape will look different as growers start to cultivate higher THCV strains. As of today, strains with 0.5-1% are considered high THCV strains, but some strains have concentrations up to 6-8%. African sativas and strains like Durban Poison,?Willie Nelson, and Pineapple Purps have the highest concentration on the market today. If you can’t locate an African sativa, look for a strain like Cherry Pie, which has hybridized African lineage and thusly may have higher THCV content. THCV can be smoked, vaped, or eaten like any other part of the cannabis plant, and gives the clear, relaxed, and energized effect that will leave you feeling like anything is possible. 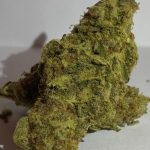