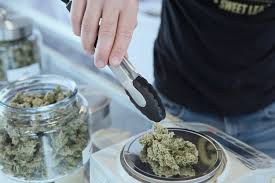 Lately I’ve been getting a few invitations to pop ups in the area. The last time I linked with some of my friends, at least one person got the bright idea to head over to some pop-up. I’ve been able to get out of it in a couple different ways. Once I had the good shit from my guy at Select, the other time I was blessed by the timing gods, since I was already on my way out when my friend raised the issue. I kept up a cool facade, but in my head I was like hell no, because who wants to travel to some random spot to get weed from someone I don’t know? I know some people who look to this as their primary way of getting weed, but I’m not one of those people. Read on to find out more about why I avoid this trend like the plague.

Reason 1: I don’t like sketchy addresses and crowds. I’m picky about my surroundings, and going to random location to get jostled by a crowd to fight over a minimal selection isn’t exactly my idea of a good time. Some of these popups are random as fuck. On my first time ever going to a popup, I was with my boy and his friend who was full of wack suggestions. He had heard about it on social media and said it sounded like a good idea. It seemed like an alright idea, so when he called the Lyft I just got in. It dropped us off in a sparse looking neighborhood with a few people standing outside. I didn’t want to show that I was freaked out, but I was definitely not expecting that. He made it all hot, too, by trying to joke too loudly with two big dudes with dreads that were standing outside what turned out to be the spot. It turned out that sellers were starting to leave. After all that! There were one or two sellers still around, but they were overeager and I was trying to get out of there. That friend of a friend was never allowed to come around again.

Reason 2: I like being on my time, not yours. Besides the location and the sketchiness of the one pop up I did go to, I really didn’t like the timing thing. Most pop-ups I’ve been asked to go to are in the middle of the day, from like 1pm to 6 in the afternoon. Yes, I work from home right now, but who wants to stop what they’re doing to go drive to pickup pot? If I were going to look for something good, how would I be able to find it if I’m on a time crunch? You can find popups that go later, but a lot of them are in questionable areas and for me, weed, money, and nightfall in an unfamiliar location don’t mix. I don’t like leaving work in the middle of the day, and why should I have to when my guy at Select can meet me in a convenient location for pickup, or meet me for delivery?

Reason 3: I like getting to know the guy on the other end of the transaction. Call me old fashioned, but I’m like my father in that I have a guy (or a girl) for everything. Car trouble? I got a guy for that. Money talk? I got a guy for that. Where to order the best Ethiopian take out? I got a guy for that too. These popups are full of randoms with varying levels of quality. If you don’t like it there’s no recourse. I don’t have to explain why that’s unappealing to me.