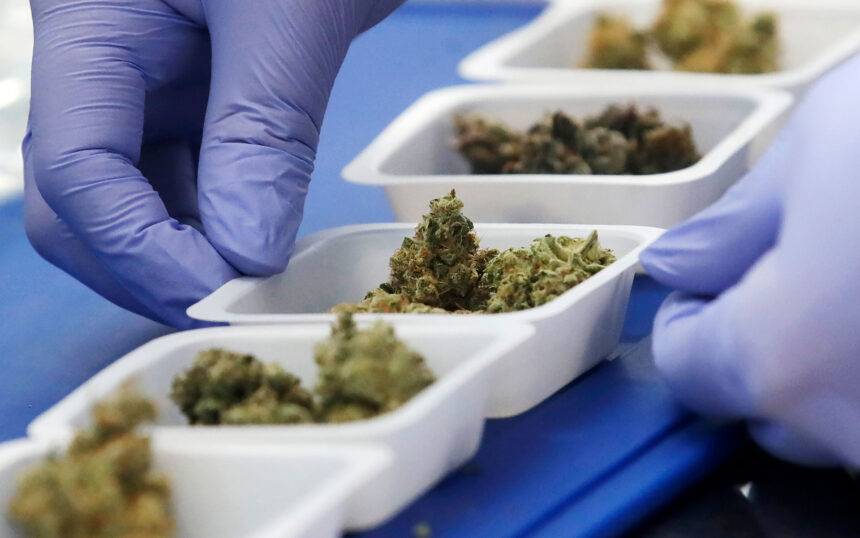 The study, sponsored by a trio of cannabis trade associations in New York, New Jersey, and Connecticut, examined two products from each of 20 New York stores that openly advertise cannabis.

“Results revealed the presence of several harmful contaminants, such as E. coli, pesticides, heavy metals, and salmonella in 40 percent of the illegal products purchased, including vapes,” the study found. “Many of the products tested did not contain the amount of THC advertised on the label and in one case, featured double the amount of listed THC. After reviewing the items under the state’s proposed branding regulations, 100 percent of the products failed.”

Flower, vapes, and edibles were tested

Lab results in the report, which can be read in full here, tested flower, vapes, and edibles from 20 different storefronts.

Researchers reported that many visited retailers claimed to be fully licensed. (In fact, no adult-use store now operating in New York has been licensed.) Some stores failed to ask customers for age-validating ID. Nearly all of the tested products failed basic quality control tests, according to certificates of analysis sent to Leafly by the NYMCIA.

“Cannabis is a bio-accumulator,” Dr. Charles said, “which means that any of the metals, pesticides, or toxins in the water or growth medium will be absorbed into the plant and then passed on to the patient or the consumer.” Dr. Charles added: “In the document, you’ll see the products that were tested, some tested for e coli, salmonella, and pesticides,” as well as “bacteria and nickel.”

In addition to the public health concerns raised by these test results, NYMCIA officials said illicit stores hurt consumer confidence in the entire cannabis industry. The stores, which are neither licensed nor legal, could also undercut the social equity dispensaries that are expected to open New York’s licensed adult-use market later this month. Those legal stores are known as conditional adult-use recreational dispensaries, aka CAURD licensees.

The new report states that there are likely “tens of thousands of illicit cannabis businesses currently operating out of bodegas, smoke shops, or other retail locations operating for an additional, legal purpose throughout the five boroughs.”

“The shops that were selected were newly-opened shops that have been trying to exploit this gap between when possession was legalized and when these first legal access points were coming online,” said NYMCIA President Ngiste Adebe in a video conference with journalists on Wednesday.

Researchers found that 20 of the 30 stores “specifically and flagrantly advertise sales of THC products, as the estimated number of ‘back room’ illicit locations in New York City is far too vast.”

Many of the stores were dishonest or misleading in their responses, which can be seen in full here.

The regional cannabis council study found toxins in these products from the following shops:

Many of the contaminated products were vapes. In 2021, a federally-funded study on vaping-related lung injuries (known as EVALI or VAPI) showed that illicit vapes are a huge public safety threat in the absence of legally regulated options.

How harmful is contaminated cannabis?

According to the NYMCIA study, “E. coli in cannabis can cause many types of infection and is most often associated with diarrheal illness and lung infections that can become dangerous. Also, if inhaled, salmonella bacteria can cause severe fevers and fatigue symptoms that can remit and relapse. Salmonella infection can also be extremely difficult to treat and can have prolonged detrimental effects.”

Testing also found that several products also contained heavy metals, including nickel and lead. The report states: “Ingesting these contaminants in cannabis is also a cause for concern. Certain metals have the potential to cause headaches, nausea, and in cases of prolonged exposure, cancer, and organ failure. Respiratory illness can also occur upon combustion and inhalation of contaminated flower.”

New York regulators recently dropped mold and other testing standards for its first batch of legal adult-use crop. While mold can harm immunocompromised medical shoppers, it’s not nearly as dangerous as the contaminants found in the NYMCIA report.

“It’s not only about contaminants and pollutants,” said Dr. Charles. “It’s also about potency testing. When patients come to a regulated dispensary or medical dispensary, all the products are tested, they know what they’re getting, they know how much of each cannabinoid is in the product, they know what cannabinoids they are receiving and taking for their care. Whereas you may have (an untested) product that says it’s a hundred milligrams, but it’s only 50 milligrams, which is less than what you’re expecting.”

The reverse scenario is also a concern for buyers with low tolerance. “You may take a product and you’re being told, or the packaging says, that there’s only 5-10 milligrams in a product, which is a reasonable micro dose for some people,” Charles explained, “(But) then there’s 50-100 milligrams in that dose, which can lead to a negative overall experience.”

Many of the products purchased at New York’s illicit stores tested were far lower in THC content than claimed on the label.

Experiences with bad bud turn off new customers, who think they’re shopping on the legal market, but are really buying some of the worst stuff possible.

Juan Carlos Hunts is a legacy operator born and raised in Queens. After 20 years of selling the plant illegally, he is a proud CAURD applicant and the co-founder of New York for Social and Economic Equity (NYSEE), which helps entrepreneurs in New York build wealth through ownership.

Carlos Hunts agreed with the claim that illicit shops are harming customers and the communities that are supposed to be prioritized in New York’s legal market.

After New York’s MRTA (the cannabis legalization law) passed in 2021, Carlos Hunts said he “was going around talking to different deli owners and smoke shop owners when they were scrambling trying to find a supplier for product.” He added: “They saw an opening, a window where they could make some money. The problem with that (approach) is they asked if they can get product that was $500 to $800 a pound. And they didn’t really care about the quality. They were just trying to find the cheapest weed available for their stores.”

“What these smoke shops will do is they’ll buy three to five pounds at a time, order different baggies with different names on it, and put the same strain in each bag,” said Carlos Hunts. “Once you smoke it, your brain just shuts down and you fall right asleep, you don’t even get high.”

Mark Sims’ RIV Capital recently agreed to buy New York cannabis company Etain, which has four licensed dispensaries in Manhattan, Kingston, Syracuse and Westchester. Sims told Leafly, “The findings in this report shine an important light on the work that still must be done to protect social equity operators, New York’s economy, job growth and, most importantly, the safety of New Yorkers and its visitors.” Sims believes law enforcement is the only answer. “It is clear that a key pillar of a healthy licensed, taxed and regulated market is missing—enforcement,” Sims said.

Call for consumer education, not re-criminalization

“The conversation shouldn’t be, ‘are we gonna re-traumatize people by over-policing or criminalizing’” said NYMCIA member Don Williams during Wednesday’s teleconference. “This is a segment of smoke shop owners that saw an opportunistic time in history and tried to take full advantage of it. But they’ve had no stake in the game, have no stake in the game, and don’t care about anyone’s health.”

Williams said the call-to-action from this report should be for more public education about the legal market, so buyers and sellers can make informed decisions as the market matures. “The whole point of MRTA was to bring justice to certain communities,” Williams said. “We are not calling for arrest or decriminalization–We’re calling for civil penalties and fines for repeat offenders and those most egregious act actors in this space.”

“If somebody is newer to cannabis, and they see in the media that cannabis is now legal, they’re not realizing that not every dispensary or storefront that they’re seeing is actually a regulated legal storefront, they’re gonna assume that the experience that they had with this new popup storefront in Times Square or in their neighborhood is the same as what these licensed dispensaries are providing. And a negative experience there will then affect the perception that they have of the cannabis industry and of the dispensaries that are here in, in New York State and New York City.”

NYMCIA president Ngiste Adebe said that both medical, and prospective adult-use dispensaries will ultimately benefit when illicit stores disappear. This report, and New York’s Office of Cannabis Management (OCM) has shown little to no interest in low-level suppliers who operate under the radar, and within the MRTA possession limits. Their concern is brick-and-mortar operations that claim to be licensed and advertise products that are untested and unsafe.

“This is an issue that has been live since they legalized possession in the state of New York without having a legal pathway to acquiring cannabis,” Adebe pointed out when asked if corporations like Columbia Care are more invested in this issue than other stakeholders. “The problem stands regardless of who is active in the adult use market, and it will impact the overall health of the legal marketplace, as we’ve seen in several other states where this dynamic can be particularly challenging to navigate.”

“As someone who has an illegal farm in upstate New York’s Hudson Valley, I realized how bad the quality was (immediately),” said Carlos Hunts. “When the nugs are really small and withered in, they’re completely distressed, they’re pumped with fertilizer, they’re pumped with different chemicals or pesticides.”

Carlos Hunts said he learned that many illicit stores are being supplied by guerrilla growers shipping from Cali. “It is the worst kind of weed,” Carlos Hunts said, adding, “We’re re-traumatizing these communities by allowing these people who have no stake in the business (to take advantage).”

“Medical cannabis has been in New York since 2012, (and) it’s extremely easy to get a medical card,” said Charles. “There are multiple dispensaries all throughout New York State and New York City that will give you access to regulated tested quality flower and consumable products,” including “products that could be used for medical medicinal use without having to worry about feeling the euphoric effects of cannabis.”