My brother worked on his sign for two hours before heading out to the protests. We grew up outside of Asheville, North Carolina, but after we graduated from high school we went our separate ways. When we had to quarantine I was in the middle of my second year of state college. My brother was in Seattle, where he had moved to after a couple of years of Oregon. He loved the outdoors and the pacific northwest so he was in heaven with all the hiking and nature out there. He picked up a job at one of the facilities out there and last I heard he was living the dream. So I was really surprised to get the call from him at 10pm one night, and on a Sunday no less. He was hurt and needed help, but didn’t want to tell our parents. Once he told me what he had been up to, I immediately knew why. He had been out protesting in the streets. Our parents are super conservative. Boys hunt and fish, girls clean the house and all that. They weren’t going to like this.

I sent him some money I had saved, but in the end I had to tell them what happened. My mom left on a flight a few days later and when she returned, she had Ethan with her. He looked different, not like the brother I knew growing up, but when you talked to him he still had that happy go lucky attitude. Now, he was a little more intense and he had stitches, but he was still basically the same. The doctor said that an inch lower would have blinded him in his right eye. His hair had grown out a little bit too. He grew it for the rest of the summer. Ethan eased right back into life at home. He was hunting and picked up jobs with our neighbor Matt. The only thing that was really different was that every night he would go outside before dinner, then come back and eat like a horse. One night I followed him and caught him red eyed, and red handed.

“Ethan!” I said, alarmed. “What are you smoking!” He turned around and gave a little laugh. It turned out that he had been smoking every night since he got back from Seattle. He was a little depressed and chronic pain from the rubber bullets and the only time he felt relief was when he smoked. Like I said, we grew up extremely conservative, so I knew our parents would not approve. He asked me to keep his secret and I decided to because it would only get the both of us in trouble if anyone found out. I noticed that his behavior changed after the weed. He was more like his old self. Really like his old self. I noticed that the rest of the time he was just trying to hide some of his pain.

I started trying to understand more about why it was such a big deal that he smoked. It made him feel better, and it made him functional and helped with the pain. What’s so bad about that? I read about medical cards and got excited, only to find out that there were no medical marijuana allowances in our state, just decriminalized possession for less than half an ounce. I tried to talk to my parents about it, but they didn’t understand. Especially, my dad. My mom wouldn’t talk about it at all. So, I decided it was up to me to try to do something. I started registering people to vote and supporting legalization for my brother. Now I’m voting for the first time in November and I’m making it count. He didn’t do anything wrong and the weed only helps. Is that so wrong? I think not. My brother deserves the right to smoke. 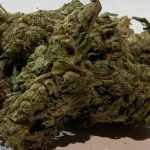