Most Patriotic Strains To Celebrate 4th Of July 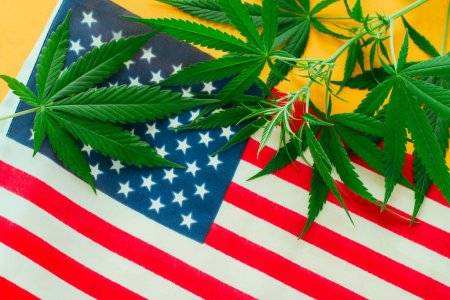 It’s the 4th of July, and that means it’s time to break out the BBQ, fireworks, and blunts to get lit to celebrate American Independence Day. To us, there’s no better way to celebrate life, liberty, and the pursuit of happiness than by trying some new bud. Here is a rundown of the most patriotic strains to try this fourth of July weekend.

If you want to impress your stoner friends, try Danky Doodle

Better known as Double D, Danky Doodle is a 90% Indica dominant strain known for the large buds on the plant that vaguely resemble other “large buds”. Created by K.C. Brains, it can be hard to come by in the everyday dispensary, but it’s easy to recognize: it grows like a weed and has a dank, spicy, and pungent scent. The taste is a journey of its own, starting with a hint of sweet honey that quickly turns into a sour, skunky, earthy taste that gets heavier with every inhale. This strain produces a heavy, heady high that leaves with a euphoric finish. If you’re lucky enough to come across this strain on the open market, don’t pass it up.

If you have to mediate arguments at the family BBQ, try Obama Kush

Are you the one mediator? The one who calls the tiebreaker? If so, you probably want a calming yet energizing high that invigorates and inspires. Look no further than Obama Kush. Known also as Obama OG or Obama OG Kush, this Indica dominant strain has a peppery taste accented with a citrus aftertaste and notes of pine. Obama Kush is a bit rare, but if you can get your hands on some, you’ll be rewarded with a diplomatic high that produces powerful physical effects as well as an intense cerebral lift. It’s known for its powerful pain fighting effects against migraines, so it’s also probably good enough to fight that day drinking hang over.

If you want to light up just before the fireworks start, try Fire OG Kush

Fire OG Kush is a happy, lemony scented bud that gets its name from the frosty red hairs that appear on the flower, which resemble fire. Its just like a fire, this Indica-dominant hybrid strain catches up to you quickly. Just a few hits or bong rips and you’ll feel its buzzy, euphoric effects. Potent and long lasting, this is one of the strongest OG strains, and not a place to start for the newbie or novice.

If you want to get higher than fireworks, try Liberty Haze

According to the Constitution we’re all entitled to life, Liberty Haze, and the pursuit of happiness. Well, don’t quote me on the Liberty Haze part, but that strain is definitely worth pursuing. Known for its lime taste and its potency, this one will knock you on your ass, with its 26.71% THC content. Exercise with caution, because this strain is known for producing mixed effects, with some reporting an energizing high that makes them feel prepared to take on the day, but others report being couch bound after just a few hits.

If you want to skip dessert, try Apple Jack

Why have apple pie when you can have Apple Jack? This popular hybrid strain gets its name from its apple scented buds, which are accented with hints of skunk and earth. It produces a ?calming, soothing high with just a hint of energy. It can feel less challenging for some, but others report that it’s a perfect daytime high: even, balanced, and energizing.

If you want to sleep through Fireworks, try Presidential OG

Cue “Hail to the Chief” because this one is going to have you wanting to take a spot in the Oval Office. Presidential OG will definitely get your attention, with its citrus smell and earthy, piney flavor. This strain is known for its strong sedative effects that hit hard and fast. It’s a strong choice if you want to sleep through those fireworks that are going off all night every night.

Something In The Water Concert in DC