As the winter months arrive and the sun retreats earlier in the day, smokers are forced inside with nothing but time to burn. As we embark on this year’s tournament, smokers from around the nation will be zoned in as marijuana strains from around the world battle it out each week as we head towards March Madness.

The 1st matchup between Biscotti and Afghan Sour Diesel went down as expected, with Biscotti moving on to the next round thanks to its great genetic makeup. Whenever you combine the world-famous Girl Scout Cookies with Gelato #25, what you get is a hard-hitting hybrid strain that’s 80% Indica and 20% Sativa. With each pull of Biscotti your thoughts go further down that rabbit whole and with THC levels consistently around 25% it’s no wonder why smokers are left in a giddy uncontrollable laughter. Another bonus of having a high THC level is Biscotti’s ability to assist with chronic pain, depression and stress.

As for Afghan Sour Diesel, also being a hybrid strain but with a more balanced 50-50, Indica-Sativa profile. Afghan Sour Diesel gives off a citrus fruity like aroma with a hint of diesel and with THC levels normally testing around 16% it packs more of a cerebral head high instead of a full body effect. If you’re looking to get relaxed but focused while also having the creative juices flowing, Afghan Sour Diesel is the bud for the occasion. Because of its uplifting qualities, Afghan Sour Diesel is commonly prescribed to individuals battling anxiety, depression and bipolar disorder. Also, be sure to have snacks nearby as Afghan Sour Diesel also works great for those dealing with a loss of appetite.

Being a new strain to the market, Biscotti moves on to the next round of the Winter tournament and will provide fans of warm baked treats a pleasant surprise during the Holiday Season as it has been described as having a sweet scent and taste of sugar cookies mixed with a dab of cinnamon.

Be sure to tune in for next weeks review as we look forward to the face off between Chem Fuego versus Lemon Meringue! 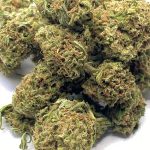