Even though stay at home orders have been lifted in somestates, I’m still very much #social distancing. That means my big outing for the week is usually going to the grocery store. I typically stock up on Fridays, but I was already vibing on some good stuff from Select on Thursday afternoon when I realized my snack game was a little weak. I decided to pick up some Truffle Cheese Bites and Belgian Chocolate cookies at Trader Joe’s since there’s one nearby my house. It says a lot that I was willing to brave society to get a taste, but Trader Joe’s is the OG of snacks, don’t at me. Here are some of my thoughts from grocery run.

I’ve been struggling with social anxiety lately, which usually isn’t much of an issue for me, but something about being out and about with masks, gloves and partitions agitates me, big time. Society as a collective is getting more agitated, because fuck these food shortages and everything being closed. Spring Summer is prime time and missing it has everyone feeling antsy.Every time I’ve gone out to do my shopping I come home and light up because once I get home, I realize I feel extremely anxious. The biggest thing I noticed is that right now that anxious feeling is gone. Smoking before heading out to the store made all the difference. I’m actually smiling at people under my mask, but can they even see that? If they can’t, that’s probably a good thing. Why is this so funny to me? Probably another plus that no one can really see my face right now.

Then again, maybe it’s not such a good thing that my social anxiety is down, because people are way too close in here and I’m feeling more chill than usual about that.

The produce aisle at grocery store way more pleasant if you’re high. Like, a lot more. The veggie wall is like a fresh meadow. The kale is greener, the strawberries smell even more sweet. Somebody took the time to arrange the bananas and mangos just so. Is it weird that I feel a little bit grateful for that? Like damn, somebody really left their house to and went the extra mile to make sure this fruit looks beautiful.

It’s not just the produce. Basically, everything looks good, and it’s hard to stay focused on just getting a few things. I just need chips, so why am I looking at a veggie spiraler? Aesthetically, it’s a toss-up between the chip aisle and the cereal aisle in the regular grocery store but here, these cereals kind of look like the 1970s. I ended up with way more food than expected, mostly chocolate chip dunks, some chicken samosas, cauliflower gnocchi and some eggs, which I don’t even need. They were out of the truffle cheese bites, which made me sad for a full five minutes. I got peanut butter crackers instead but I’m still mad about the mix.

Getting into the house feels a lot harder than heading out to the store for some reason. And my bags are so heavy, but I’ll do basically anything to avoid making two trips. And I’m not going to judge myself for putting down my bags and tearing into those peanut butter cookies like immediately.

If you’ve made it this far, thanks for reading. Writing about my high-ass grocery runs during these times feels weird but so does not acknowledging it. Stay safe and stay high. 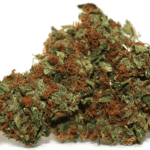