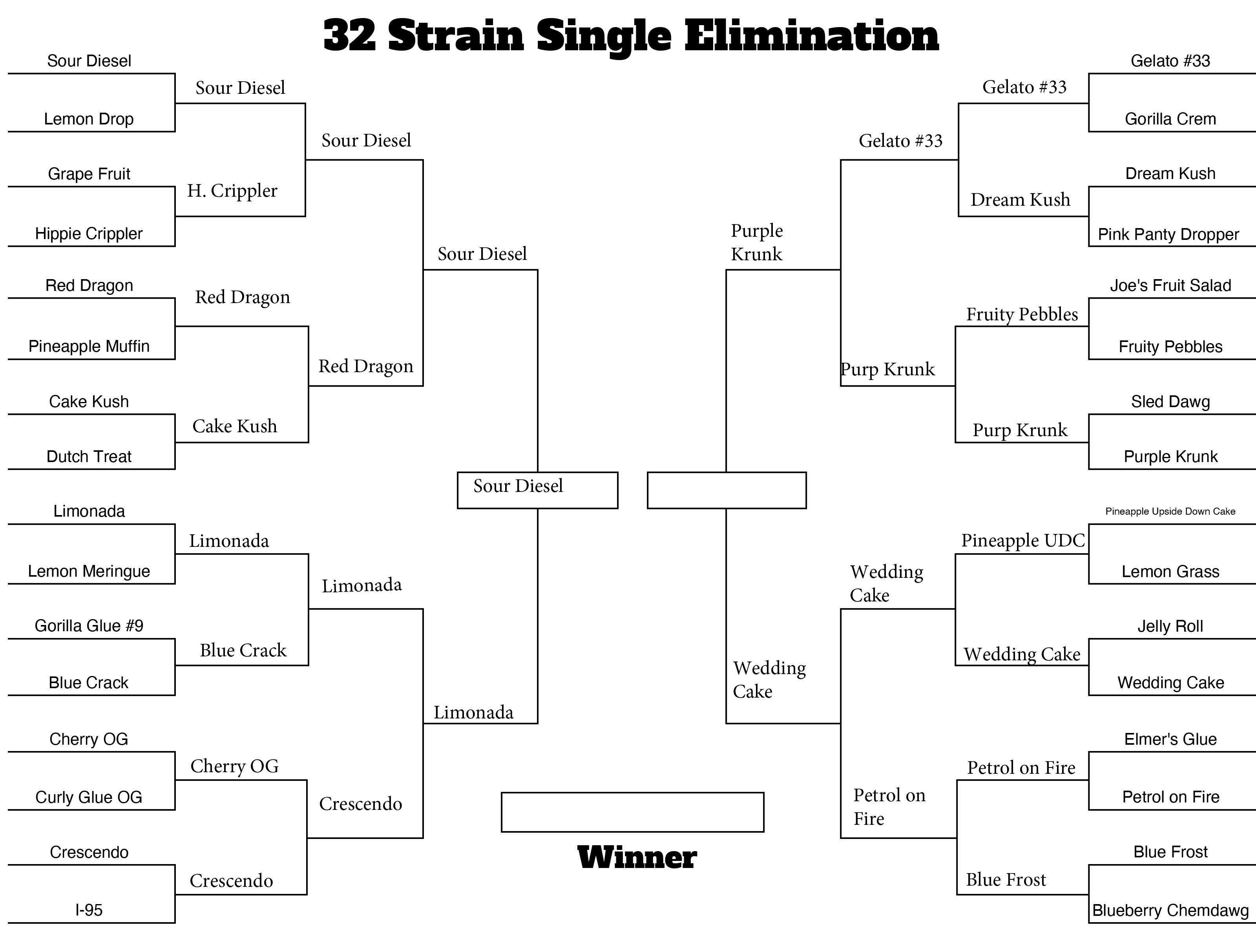 After dispatching of Red Dragon in the Elite 8, the #1 seed Sour Diesel moved on to face Limonada in the Final 4. This was a classic matchup between old school vs new school with Sour Diesel being the veteran strain that has stood the test of time. Sour Diesel being a sativa dominant strain captures users with an instant energetic mental high. True to its name, Sour D gives off a penetrating gasoline like aroma. If you came up through the 90’s blowing trees, chances are that you came across some Sour D along the way. Being a child of Chemdawg 91 and Super Skunk, this 90’s baby strain is a legend in the smoking community. Known for its ability to provide a creative and focused energy, Sour D has also been known to leave users with cotton mouth so be prepared with a gallon of water on deck. With THC levels of up to 25%, this potent strain is also great at the end of the night when it’s time to wind down and relax as the Indica side of Sour D provides some physical relaxation.

Many thought that this may be the year where Limonada would break through to the Championship matchup. Having breezed by Crescendo in last week’s matchup, Limonada seemed up to the task. With origins coming from a cross between Gorilla Haze and Lemon OG, this sativa dominant strain tastes and smells just like Lemons. Being heavy on the sativa side, Limonada is ideal for a wake and bake session along with times when focus and creativity is a must. Limonada is a strain that passes the look, smell, and taste test so it’s easy to see why Limonada will be a yearly threat during tournament time in the coming years.

As the tournament winds down Sour Diesel finds itself in a familiar place. As in past years when Sour D has entered the tournament as a #1 seed, being a favorite in the Championship matchup is nothing new. Next week’s matchup between Purple Krunk and Wedding Cake could potentially provide Sour Diesel with its hardest Championship matchup in recent years. Coming off a slug fest against Pineapple Upside Down Cake, most pundits view Wedding Cake as the strain with the best chance of knocking off the #1 seed Sour Diesel.

Tune in to next week’s Final 4 matchup to find out which strain will represent the Indica side of the bracket against the heavily favored Sour Diesel.