Education is a fraught topic in the budding legal cannabis industry, and that’s on purpose. Since the 1930s, cannabis lovers have been depicted as living on the margins of society. Onscreen, white men are shown as affable stoners, while black and Latino men are shown to be uneducated, violent, shiftless, criminals. If they are white women, they are constructed as the privileged slacker (see: Broad City) or as the educated suburban white woman who picks up the sticky stuff as a result of dire circumstances (like Mary Louise Parker as a suburban mom/dealer in the show Weeds and Martha Stewart in real life). Black and brown women, if they appear at all, typically are shown as negligent mothers high out of their minds. However, as the winds of change progress towards legalization, I believe that this image will change, but not for the better.

This isn’t a new phenomenon. Since the dawn of television, cultural attitudes have shifted on sexuality, race, gender, alcohol, and smoking. My concern is that in 10 years, the image of mainstream media stoner will be a brilliant, privileged, white male instead of reflecting the reality that most of the people who paved the way for the already billion dollar cannabis industry are people of color with limited options, who had their options further limited by racialized policing and enforcement. If you don’t believe me, take a look at any “40 under” list for the cannabis industry. The shift is already happening.

Take for instance, the university cannabis programs that have begun popping up recently. As of the end of 2019, nearly 20 colleges and universities in the United States offered courses related to cannabis, including the University of Maryland, University of Denver, Stockton College, and University of Vermont. The University of California, Davis, has established a Cannabis and Hemp Research Center. So, where does this leave those who have been most affected by federal cannabis law? The answer is, behind.

The people who will benefit are those who can afford a legal and structured education program. Universities are slowly, but surely opening education programs associated with four- year universities designed to teach the cannabis business to young entrants. Education is, of course, a good thing, but it is creating a workforce that will have little to no context to understand the negative impact cannabis laws have had on black and brown communities. In the next decade there will be an influx of people who will learn how to grow, cultivate, quality control, market, and analyze the cannabis business. The people who stand to gain the most from this initiative are privileged kids who are safe to pursue a career in cannabis and augment an economics or finance degree with additional cannabis education. Ultimately, they can leverage connections from that program to build and ultimately grow the legal cannabis industry, while never having to interact with people who are already experts on the science of cannabis and have suffered for it.

My concern is for the people who sold or used and have faced the consequences of prison due to where cannabis sits on the federal schedule, and to say that racial disparities persist is an understatement, even in states with fairly broad support for legalization. Just ask New York, where black people made up 97% of marijuana related cases in state capital over the last year. Depending on age, educational attainment, length of time imprisoned, that population will be at a significant disadvantage and unable to take advantage of those opportunities.

The answer to this is complex, but pathways need to be created for those negatively impacted by the criminal justice system. Clemency programs and celebrity advocacy are a start. Federally descheduling cannabis is a start. Grassroots cannabiz education programs and “Jail to Jobs” programs like Massachusetts’s CultivatED are a start. Although, I have to ask, what’s the point if they will only train former felons to attain a low skilled or specialized work if they have the potential to do more. Some of the best possible business minds in the country have languished in prisons for decades. GED programs for those who didn’t finish high school need to be implemented. The would-be scientists of the cannabis industry need to have scholarship funds dedicated to them. If today’s current (limited) efforts do not pick up steam to create pathways, those with marijuana record may still find themselves part of a permanent underclass, while the industry buffs up a shiny new image of the brilliant white cannabis entrepreneur.

In 20 years will studying the cannabis industry become as ubiquitous as studying economics or communications? It’s possible. Where one university starts in order to create a competitive edge, the rest will surely follow. However, don’t we owe it to the people who served their time to not to force them into obscurity and second-class citizenship while those who never faced the same challenges go on to become captains of industry? I think the answer is yes. 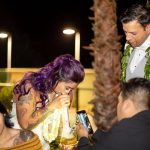