As more states legalize medicinal marijuana, additional opportunities open up for medical science to research the cannabis plant for one or more cannabinoid compounds that can provide the medical benefits of cannabis without any psychoactive effects. One such cannabinoid group is cannabigerol, also known as CBG, which is found in hemp and is believed to block the psychoactive effects of THC while still providing medicinal benefits. There’s no telling what advancements medical breakthroughs in this area will bring. Since most anti-cannabis public figures object to the feeling of getting high that THC provides, removing the psychoactive component while leaving all of the benefits will effectively neutralize many criticisms of the plant. Cannabigerol momethyl ether, or CBGM, may hold the potential to be “the one”.

CBGM is a natural cannabinoid classified as part of the CBG group, and is grouped as such because it possesses qualities similar to CBG. Like CBG, it was discovered in the late 1960s and could potentially help relieve chronic conditions like glaucoma, Chron’s disease, psoriasis, cancer, and arthritis. Also, like CBG and other compounds in the cannabis plant, much more research is needed to understand the potential of this compound. Scientists in Japan were the first to isolate CBGM from a Japanese hemp strain called Minamioshihara No 1. They found that the syrupy yellow substance was only one of two cannabinoids in the CBG group that was an ether compound, which is an oxygen atom bonded to two aryl or alkyl groups. Ether compounds were among the earliest anesthetics in the 1800s and frequently occur in pain relieving medicines like Codeine, which is the methyl ether of morphine. The highest concentrations of CBGM have been found in cannabis plants from northeast Asia, and potentially in seeds originating from South Africa, but it is unknown whether natural climate and land impact the concentration of the compound or if cross pollination is the driver for these results.

Still, due to obvious factors like limited research dollars and political difficulties securing support for additional serious research on medical applications for cannabis, not much is known about what makes CBGM different from other cannabinoids in the CBG group, which means most of what exists in the market currently is speculation. However, it is thought that CBGM might possibly act as a counterpart to CBG, without producing any negative side effects.

In regard to the legality of the compound, CBGM, like other cannabinoids, isn’t specifically listed as a scheduled cannabis substance. However, this doesn’t explicitly exclude it as a scheduled substance, as confusing as that might be. Cannabis is listed as a schedule one substance, which means that any substance that is structurally or pharmacologically similar to cannabis, including those which fall under the CBG subgroup, are considered substances with high potential for abuse and addiction. Yes, even if they don’t get you high. So, despite its potential medical applications, CBGM is, for all intents and purposes, considered illegal. In regard to the compound’s likelihood of showing up on a drug test, an employer would have to specifically request that, and it is unlikely that this very specific form would show up, since most tests target THC. However, it’s unwise to test that theory, given that cannabis is still federally illegal.

The potential for CBGM as a medical treatment is extremely high, but it is unlikely that we will know the full potential of the compound for years, since it has to be studied fully. However, its analgesic properties and potential for treating chronic gastrointestinal and bone diseases make this cannabinoid incredibly interesting to watch. 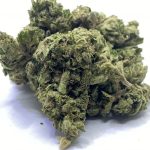