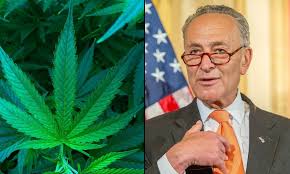 The National Organization for the Reform of Marijuana Laws, commonly referred to as NORML is an organization that has been advocating for the legalization of the marijuana for decades. The organization has a running archive on the status and structure of the Marijuana Opportunity Reinvestment and Expungement (MORE) Act on its website. It is interesting to see the focus of the bill change over time in the media and in politics. NORML last reported that in December members of the House Rules Committee have advanced the Marijuana Opportunity, Reinvestment, and Expungement (MORE) Act, HR 3884. US Senate Majority Leader Chuck Schumer has indicated he is putting together a “new federal marijuana legalization bill”, according to Marijuana Business Daily. This bill is to focus on states tax revenues.

Critics of such “new” marijuana legislation as well as advocates for the MORE Act have indicated that the focus for cannabis legislation has begun to focus on the opportunity for business. Capitalizing it. It is clear revenue generated from cannabis has always been a driving force for legalization. Advocates such as NORML also point to the reality that Reinvestment and Expungement are critical social issues and elements of the original bill some lawmakers appear to not hold as important tenets.

Senator Shumer’s bill “would allow states freedom to do whatever they’d like and put tax revenues into minority communities most harmed by the prohibition? How these revenue will be put into Minority communities is the question. There is also concern and skepticism that such a question will not be answered, but simply politicized.

Schumer spoke to former NBA player Al Harrington CEO the LA based cannabis company Viola brands. Schumer indicated not only did he want to help minority communities, he also wants to ensure corporations do not take over the industry. Schumer was quoted as saying “I don’t want to see these big tobacco companies coming in and shoving everyone out,”.

Marijuana Business Daily reports the investment banking firm Stifle released a statement indicating this could be “the most important catalyst in the history of the US cannabis industry…” The firm went on to discuss the tax and business opportunities while mentioning social injustice provisions. I have never heard an investment bank so excited about social justice. It seems that anytime business speaks of legal cannabis they throw in the obligatory, “and social justice of course”… Let’s see how the MORE Acts unfolds…