Operating cannabis-based businesses in The Golden State is no easy feat for retailers. With the plant’s legal status confined by the federal Controlled Substances Act (CSA) boundaries, cannabis stores are still operating illegally.

Based on federal law, anyone who cultivates, sells, consumes, possesses, distributes, or transports the plant will face criminal prosecution in federal court. But how do California’s cannabis businesses conduct day-to-day operations in a world of contradictory laws?

According to the Office of Congressmember Ed Perlmutter, one of the major obstacles is the financial aspect. Due to the plant’s illegal status, banking cannabis business revenue can be tricky. “Financial institutions providing banking services to legitimate and licensed cannabis businesses under state laws are subject to criminal prosecution under several federal statutes,” reads a statement from the office of Perlmutter.

Before the legalization of cannabis use in states like California, store owners endured frequent raids by federal law enforcement. Although raids are less common nowadays, cannabis shops still risk a raid by violating the federal prohibition of cannabis as a controlled substance. On the plus side, advocacy groups like the California Growers Association, Americans For Safe Access, and the California Cannabis Industry Association are pushing to make cannabis more socially acceptable.

According to figures published by the California Cannabis Industry Association, the state’s cannabis market in California currently pulls in annual revenue of $5.6 billion. By 2024, analysts predict the figure will rise to $7.2 billion.

At one stage, the Californian cannabis market was restricted to cash-based transactions, which posed a big challenge for sellers and buyers alike. Fortunately, things have changed over the last few years. Some businesses have adopted the services of credit unions that allow deposits from cannabis business accounts.

One such example is The Artist Tree. Founder of the West Hollywood-based company, Lauren Fontein, told reporters that her team tracked down a credit union that permits debit card transactions.

“The difference is that a debit card can be processed like an ATM withdrawal. When something transacts as a debit, the money has to be in the person’s account – so there’s any credit type of transaction going on. It’s an immediate withdrawal,” she told reporters. “In the past, it was definitely difficult because it can be hard to actually spend cash on things because a lot of things don’t take payment in cash.”


Obtaining cannabis store supplies also poses a problem for California’s licensed businesses since they are limited to sourcing materials in-state. The fact that interstate commerce falls under federal jurisdiction means that stores are unable to receive goods from across state lines.

“In the state of California, the regulations require that we only purchase products from licensed California cannabis distributors. So they have to be based in the state,” said Fontein, adding, “We can not get anything that is produced outside of California and everything we purchase is tracked by the state.”

Operating a cannabis business in California or participating in commercial activity without the necessary state and local licenses is against the law. For this reason, among many others, cannabis business owners must practice caution when entering the market.

To find a resolution for the roadblocks faced by cannabis companies in California, Perlmutter has authored the SAFE Banking Act of 2021. This act would shield banks and financial institutions that choose to assist cannabis-related businesses. What’s more, Gov. Gavin Newsom signed a legislative measure in mid-September that would legally enable California’s cannabis businesses to sell and transport cannabis across state lines.

CA SB 1326 (21R) was introduced by state Sen. Anna Caballero (D-Salinas). The bill is similar to Oregon’s 2019 law in the sense that it will enable California’s governor to create deals with other states that license cannabis businesses.

Anyone who runs or wants to launch a cannabis business in California must abide by the DCC’s regulations. The following resources will help you to get started: 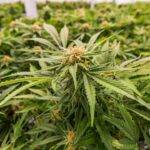