How did an indie rapper from The Bay find himself among Hip Hop’s cash kings, like JAY-Z and Dr. Dre? Legal cannabis, and a whole lot of hustle.

This week, former Forbes entertainment editor Zack O’Malley Greenberg crowned Hip Hop’s cash kings of 2022, an annual list of top earners that started in 2006. The first ever list was topped by JAY-Z, who reportedly made $34 million back then. This year, he reclaimed the top spot with a much higher figure ($1.5 billion), alongside Forbes fixtures Diddy and Dr. Dre.

Contents
How did an indie rapper from The Bay find himself among Hip Hop’s cash kings, like JAY-Z and Dr. Dre? Legal cannabis, and a whole lot of hustle.How did Berner rise to the top of the weed industry?Don’t sleep on Berner’s music, it’s more than a hustleThe value of platforming the legacy cannabis cultureCounting Cookies’ 2022 wins

But one name on the 2022 list sticks out like a green thumb: Cookies cannabis mogul Berner, who rarely charts on Billboard, and has said he doesn’t aim for radio play. That’s because Berner doesn’t owe his fortune to streams or stadium shows. He earned the bulk of his half-a-billy from legal bud.

According to O’Malley Greenberg’s new report on Hip Hop’s wealthiest artists, the five top earners in rap are worth $3.8 billion combined. Berner’s net worth is clocked at $410 million (just $10 million shy of that magic number). The Cookies CEO has said he once turned down an $800 million offer in the company’s early days. Now his estimated 30% ownership stake in Cookies and combined with equity in dozens of other cannabis entities put him among his music idols when it comes to net worth.

How did Berner rise to the top of the weed industry?

Berner still remembers when people only knew him as an indie rapper. Before he was fielding billion-dollar offers for Cookies, he was a local artist who loved weed so much that he got a day job as a budtender. Then he met Wiz Khalifa and signed to his record label.

Things have grown organically ever since. And to bring the spliff full circle, Berner was instrumental in helping Wiz launch the critically-acclaimed Khalifa Kush brand in 2021, and Cookies remains the exclusive supplier of KK in Nevada and California. Other major partners include rap giant Rick Ross, and retired NBA star Gary Payton, whose self-titled cultivar is a bestseller to this day.

“Cookies outgrew me,” Berner said proudly when asked about his multi-state operation on The Bootleg Kev Podcast last year. “People know what Cookies is and don’t know me. That’s amazing.”

Without the mainstream platform of hit songs or airplay, Berner has still found a way to corner the valuable intersection of pot and pop culture at the highest levels. Even Curaleaf, the largest cannabis company in the world by market cap, can’t draw the lines or viral hype that Cookies brings to every market it debuts in.

While Dr. Dre, Cypress Hill, and Wiz know exactly how to top the charts with music about bomb weed, Berner has mastered the art of growing and distributing chronic that resonates with the industry’s most engaged users.

Don’t sleep on Berner’s music, it’s more than a hustle

“I don’t wanna go big. I don’t wanna be on the fucking radio, bro,” Berner explained in 2021. His success in legal weed, he said, now protects his creative freedom as an artist. Taking advantage of the freedom, Berner added to his prolific music catalog this week, dropping a new album titled FromSeed To Sale ahead of Cookies’ big storefront debut in Hip Hop’s mecca, New York City.

Last year, Berner’s Gotti album included unreleased audio from alleged New York crime boss John Gotti, with the blessing of his family. It also featured rap legends like Rick Ross, Future, Jadakiss, and Styles P. The collaborations are a dream for any indie rapper, but they’re also a key to Cookies’ marketing strategy. With many artists fancying themselves cannabis connoisseurs, the Cookies brand is both a status symbol, and an awesome source.

Lil Wayne, “You Only Live Twice”

The networking shows in Berner’s 2021 Spotify wrapped report, with 8.2 million fans enjoying almost 100 million streams from his prolific catalog. With over 40 independent albums and plans to drop new Cookies genetics all the way through 2080, Berner’s still got much more to teach the world about growing green on your own terms.

In the 2000s, the advent of streaming data legitimized rap’s place in popular culture, creating billionaires out of leaders like JAY-Z and Dr. Dre. Cannabis legalization is now mainstreaming the plant in a similar way, with the weed now ranking as America’s fifth most valuable crop, employing half a million people. And moguls like JAY and Diddy’s son Justin are hustling to enter the legal weed field with their own distinctly branded products.

The value of platforming the legacy cannabis culture

Berner’s cannabis family tree includes Yung LB (Chief marketer of Leafly 2020 Strain of the YearRuntz), Wiz Khalifa (whose Khalifa Kush brand was originally backed by Berner), and NYC legacy operators Harlem’s Branson and Luka Brazi, both of whom are working closely with Berner to get licensed in The Big Apple.

With ventures like Cookies U and partnerships with legacy operators around the country, Berner is planting seeds that should yield huge returns for decades to come. He could have cashed out years ago, if money were his only motive. Instead, he’s kept control of his operation, and used it to empower others, while pushing the creative limits of the industry at every turn.

Ad Age named Cookies one of 2021’s hottest brands in any industry, making it the first cannabis brand to receive the honor. And 2022 has arguably been Cookies’ best year to date. Berner covered Forbes, as the first cannabis owner to do so. And the Clio Awards even honored the company’s trailblazing marketing.

Ahead of this Sunday’s New York store opening, Cookies already cut the ribbon on a 10,000 square foot pharmacy in Be’er Sheva, Israel, in June. the brand also launched in new markets like Michigan, New Jersey, and Florida, and continued its multinational expansion by entering Thailand.

According to O’Malley’s report, Cookies “sells 70 strains of weed and 2,000 different marijuana-related products across its 48 stores in seven countries and 20 states.” The brand is the foundation of Berner’s fortune because of a unique business structure. The arrangement could one day allow Berner “to buy out local partners and create a unified multibillion-dollar cannabis conglomerate,” according to O’Malley Greenberg.

“With legalization coming to more and more states—and perhaps the entire U.S. eventually—he’s uniquely positioned,” said O’Malley Greenberg. “If it goes federal, and the market wants to see us with all these stores and production, then we’ll roll ‘em all up,” Berner explained to O’Malley Greenberg earlier this year. “So we’re achieving what these other companies are doing without having to put up our own capital.”

But Berner’s biggest win this year was over colon cancer. He was diagnosed last fall but has since shared that he’s in remission, and stated he wants to raise cancer awareness while making medical resources more accessible. 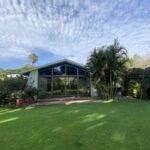