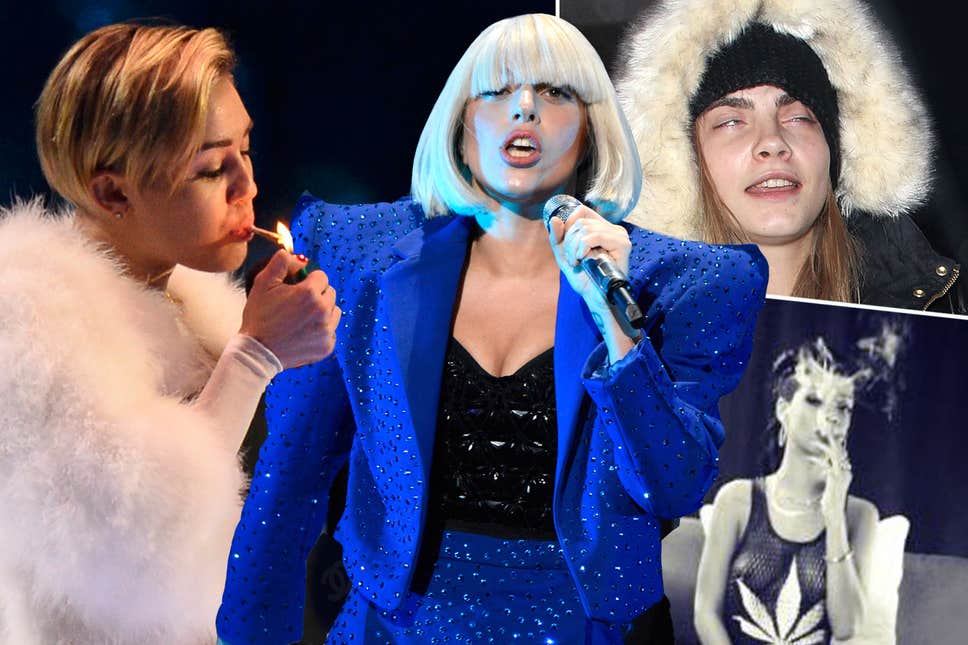 When you ask people to name a weed toting celebrity, often marijuana enthusiasts Snoop Dog, Willie Nelson, Bob Marley, and Wiz Khalifa are the names that roll off their tongues. Well, I’m here to tell you that ladies love cannabis too! There is something refreshing about women who smoke marijuana without judgment, and to this, we say, more, please! These eight female celebrities are proud smokers of the herb and can teach us all a thing or two about how to catch the vibe.

It turns out that Miley Cyrus, knows “what’s good?” Miley Cyrus has called weed, “the best drug on earth.” In an interview with Rolling Stone magazine, Miley said, “Hollywood is a coke town, but weed is so much better.” Her rationale is that weed is a happy drug, a social drug that makes you want to be with friends, not secreted away in a bathroom. In this case, I must say that Miley is right. Miley has also been known to express her love of cannabis through her wardrobe. She’s been captured sporting clothing featuring the familiar flower. And, in 2013 Miley famously smoked a joint onstage during the MTV European Music Awards, in Amsterdam, The Netherlands.

This petite pop star has made no secret about her love of weed. She admits that at one point she took things overboard. In her Netflix documentary, Gaga: Five Foot Two, Gaga shared an anecdote during the end credits about how she shocked Beyonce by smoking too much weed. “That was the night I gave Beyoncé, like, a panic attack,” Lady Gaga says. When probed about how she did that, Gaga went on to say, “I don’t know, I just always feel like when I’m with her and Jay-Z, I’m always like hanging out in the corner with like nine joints hanging out of my mouth being like “Whaaaaat’s up?!” and she’s like “You’re not a lady but why? How is this working?”

While this music legend isn’t shy about being a marijuana ally, she blamed her infamous 1994 David Letterman appearance wherein she almost dropped the “f-bomb” some thirteen times on live television, on a joint. In 2009, she admitted to Letterman that her excitement that night wasn’t bad-girl behavior, saying, “It wasn’t because I was excited about you. I think it may have had something to do with the joint I smoked before I came on.”

While this weed enthusiast has recently exited her cannabis partnership with the company Maya, whose focus was to develop medical marijuana products that eased menstrual pain, Whoopi has previously talked about how pot has helped her to cope with her glaucoma. In an article that she wrote for The Cannabist, she said, “The vape pen has changed my life. No, I’m not exaggerating…her name is Sippy. Yes, she’s a she. And yes, I named her Sippy because I take tiny, little sips — sassy sips, even — from her. And with each sip comes relief — from pressure, pain, stress, discomfort.” Whoopi has even played characters who love weed in roles on the big screen, including her 2018 performance as Tiffany Haddish’s mother in the Tyler Perry comedy, Nobody’s Fool.

This boss babe has never hidden her love of ganja from us. The Bajan-born beauty has been photographed many times puffing on a lit joint. Who can forget the Instagram collage photo that she posted of herself rolling a blunt while astride the beefy shoulders of her bodyguard at Coachella? Rihanna has even donned a kush-themed outfit for Halloween, dressing up as Mary Jane. Her unapologetic love of weed led to an interesting array of photos including her CR Fashion Book cover, in which she is captured dressed like Marie Antoinette while holding a lit blunt. A scroll through Rihanna’s Instagram will reveal her engaged in a variety of activities including swimming, fishing, and getting ready to party with Dior while smoking a blunt.

Although Sarah has been fairly open about her love for weed for a while, after she whipped out her vape pen, while showing off the contents of her clutch to E! News’ Guiliana Rancic on the 2014 Emmy Awards red carpet, her love of cannabis was undeniable. She declared, “This is my pot… it’s liquid pot,” to Rancic’s surprise. This weed-loving comedian repeated the overshare on the 2019 Emmy Awards carpet during an interview with Sharon Osbourne wherein she revealed a couple of joints taped to the top of her clutch, so that “they didn’t get smashed,” as well as a vape pen. She went on to say, “I know people always think of me as a stoner, but I just take a puff.” To which Sharon Osbourne responded, “What’s wrong with that people?” Famously, Silverman doesn’t drink, but that hasn’t stopped her from, smoking weed with her fellow comedians.

Susan Sarandon can often be seen campaigning for Bernie Sanders or making guest appearances on Rick and Morty, but when she has time to kick back and relax there a good chance it’s with

weed. Sarandon first tried weed in the late sixties, during college but she admits that outside of a brief hiatus when her kids were young, weed’s been a lifelong companion. She’s even smoked with Snoop Dog.

Funny girl Anna Faris famously tested weed enthusiast Seth Rogan’s marijuana knowledge on stage during 2016’s Popfest. The two even argued over which of them had won more Stony Awards, a bong that is High Times magazine’s equivalent of an Oscar. Faris ultimately revealed to GQ, “Seth’s won more—like three. Mine’s up on the mantel. And occasionally, it gets used.” Many have said that Faris invented the female stoner comedy, after her portrayal of the character Jane in 2007’s weed-smoking masterpiece, Smiley Face. Faris was praised by critics for her lead performance, despite the movie’s low audience turnout.