In the final matchup of the Elite 8 viewers were blessed with a classic upset between Purple Krunk and the #1 seed Gelato #33. Gelato #33 the returning champion has moved through this year’s tournament no different than years past. Like the great Celtics dynasties of the 80’s that were led by Larry Bird AKA (Gelato #33), all great things come to an end.

The thick buds from Gelato #33 have been recognized in cyphers as one of the greatest hybrid strains, composed of a balanced 50% Indica and 50% Sativa. The Indica side is in a constant battle in an attempt to overtake the body while the Sativa side provides a calming mental high. Coming from the classic Thin Mint Cookies and Sunset Sherbet family, the genetics give this strain a classic feel. The Old Heads love the subtle mood lift and creative energy boost, reminiscent of the 80’s and 90’s when things were simple and chill.

Fast forward to 2020 and Purple Krunk, the new kid on the block, has been known as the strain of the active smoker who wants to wake and bake and have some fun. This is a Sativa dominant strain that crosses the old Purple and Skunk 1. Unlike many, the name describes this strain completely due to its distinct purple buds and skunky pungent odor. Packed with THC level around 20% combined with 85/15 Sativa dominant levels, Purple Krunk provides an intense high that will keep you going strong on days that you wake up early grinding and can’t get your normal cup of coffee. Known for its ability to relieve chronic pain, body fatigue, and depression, Purple Krunk has been a go to of the younger generation who choose to steer clear of Big Pharma. 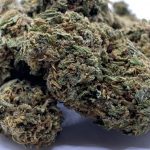