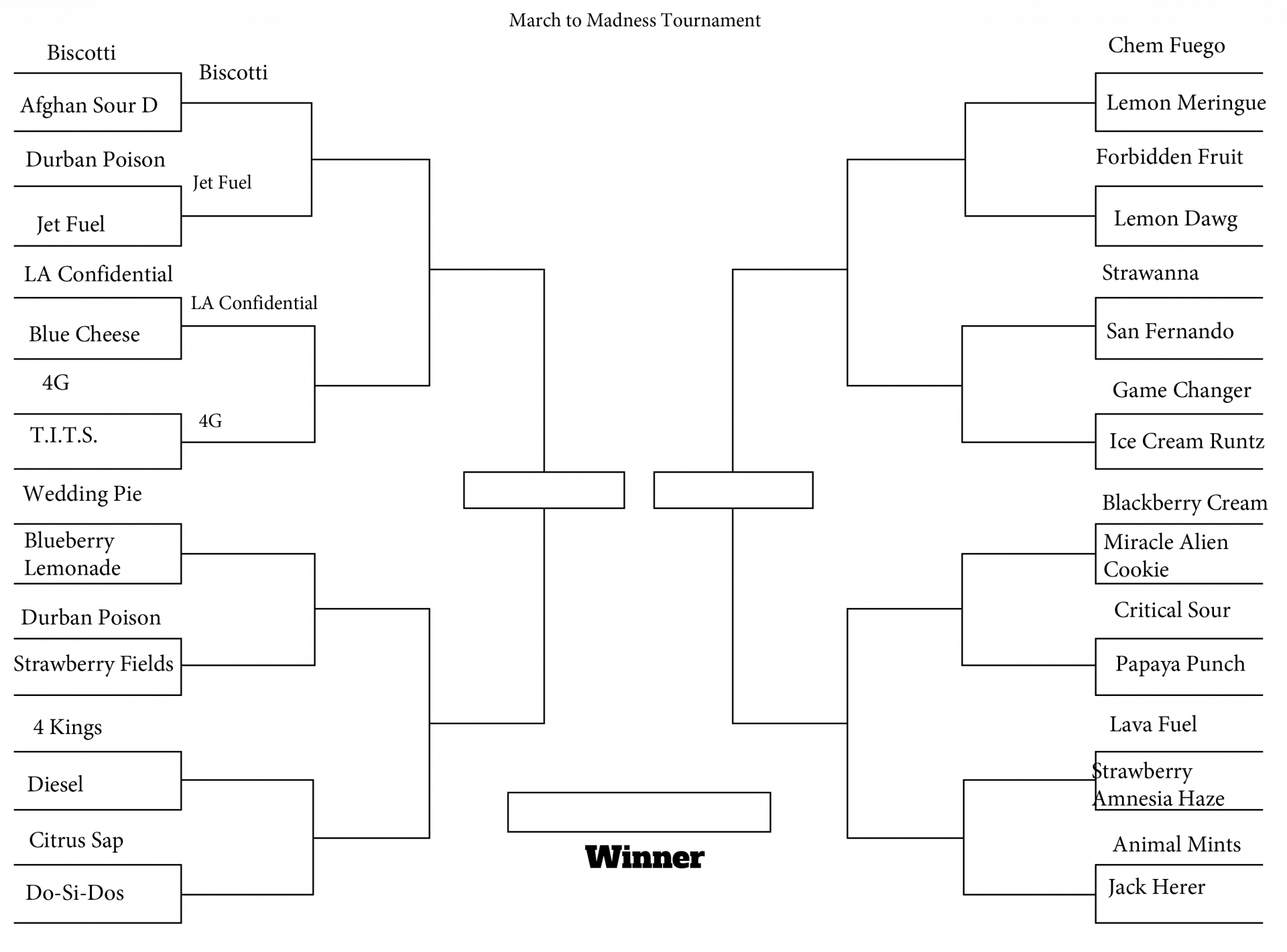 As we recap the 4th matchup of the March to Madness Tournament, it’s safe to say that if you have not heard of 4G, you straight trippin! Being the love child of the world famous Gelato #45, Gorilla Glue #4 and Girl Scout Cookies gives 4G one of the more impressive lineages in the industry. Any one of the world renowned strains would stand tall on their own; putting the 3 together provides the user with a unique experience, unmatched by many. Embarking down the journey of a 4G experience would be like going to a concert and having Jay Z headlining a show followed by Biggie and Pac. When you look at a 4G bud you realize that the appearance of this unique strain is just as majestic as the genetic makeup. Containing several shades of green along with purple and gold; one would think that the creator started with a blank bud and splashed colors on it like Robert Ross does a blank canvas. To complete the masterpiece of 4G the user is blessed with an aroma that can be described as a mix of fresh herbs and berries with a splash of pepper. As your brain begins to process the unique odor of 4G you realize that the sour smell of Gorilla Glue #4 is present along with savory fresh bake cookie aroma from Gelato #45 and Girl Scout Cookies. With a THC content averaging in the low 20%, 4G providers users with a balanced high that relaxes both the body and mind.

The greatness of 4G is even more apparent as it advanced passed “This Is This Shit”, commonly referred to as T.I.T.S., a Sativa dominant strain that is blessed with great genes itself as it was birthed by crossing last tournaments champion Sour Diesel and OG Kush Breath. T.I.T.S. is another preferred strain for the wake and bake crowd who want to replace that morning cup of coffee or Red Bull. Being a 70% Sativa strain gives the user that euphoric energizing feeling that breeds excitement and creativity. The shy guy in the corner slowly turns into a social soul after a few hits off T.I.T.S. While the body slowly eases into a relaxed state the mind is moving a million miles per hour. Possessing extreme THC levels of up to 27% makes T.I.T.S., great for individuals dealing with chronic fatigue, depression, PTSD, stress and mood swings.

After witness a classic matchup between 4G and T.I.T.S., we look forward to next week’s matchup between Chem Fuego, a rare Indica dominant strain that was created by crossing ChemDawg and Headband versus the sweet bold-flavored Lemon Meringue which packs a whopping THC level up to 28%. Stay tuned as we trek 1 step closer to crowning a champion in the March to Madness Tournament!

Edibles And Whose Fault Is It When A Kid Gets Into Them – Parents or Manufacturer?