10 Favorite Things To Do While Baked 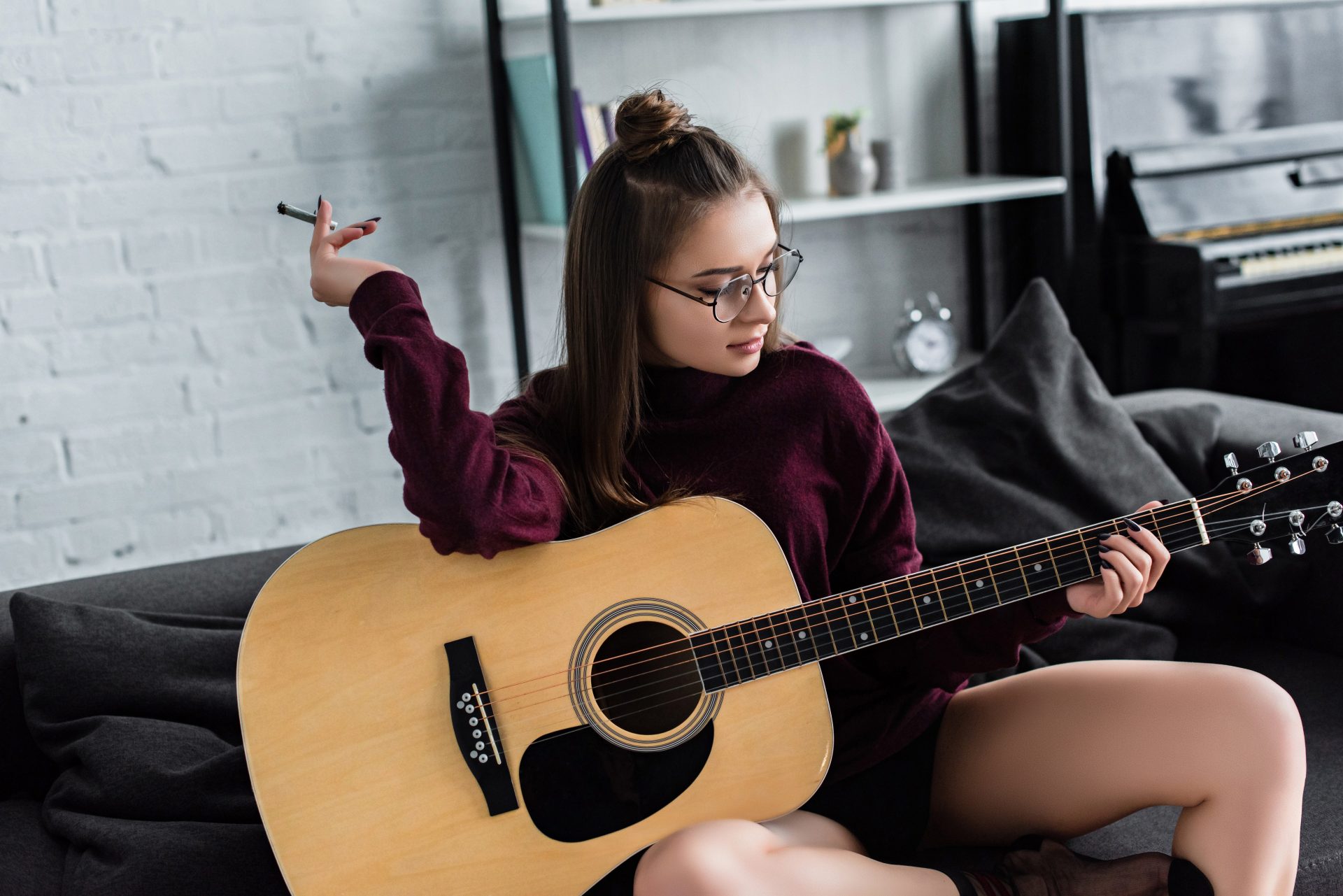 Getting high can be its own form of entertainment. There’s something deeply relaxing about rolling a joint, lighting it, and feeling the heady rush as the scent of herb wafts around you. That said, certain activities — aka “high activities,” can be an exciting add-on to getting stoned. Here are some of my faves.

Cannabis can make an already funny movie funnier, and trippier. More importantly, weed can make any movie a more immersive experience. Truly stoned, the colors are more vivid, the sound is more stereophonic. Also, you will catch all of the humor both the intentional and the unintentional. Movie watching while high doesn’t have to be limited to the genre of movies known as stoner flicks. In fact, use the moment to enjoy a complex layered story like Inception, or to finally explore the genius of Hitchcock (The Birds), or Kubrick (Eyes Wide Shut). Watch anything that will prompt an existential conversation about life, and I promise that you will leave the experience deeply satisfied.

Consuming weed is often associated with the munchies, and that’s because food just tastes better while you’re high. Scientifically THC enhances your olfactory receptors, which increases your enjoyment of food. Studies in mice have proven that the brain’s cannabinoid receptors “promote food intake in fasted mice by increasing odor detection.” While I’m no scientist, I’ve experimented enough — a few dozen post-bake Thanksgiving dinners, to know that big meals are more delicious under the influence. So, smoke a bowl and pony up to a nice five-course meal, and let your taste buds run wild.

While we don’t usually think of listening to music in terms of sensation, and instead talk about enjoying music in terms of volume, “do you hear the music?” We should feel the music. Cannabis users often describe the experience of listening to music while high as richer, textured and having more depth. Charles T. Tart’s On Being Stoned, explores marijuana’s effects on music and sound perception. “Effects on sound perception are some of the most characteristic effects of marijuana,” Tart wrote. “Further, all of these effects were perceived as emotionally pleasant or cognitively interesting, leading to greatly enhanced enjoyment of sound and music.”

Daniel J. Levitan, a music psychologist, and professor at McGill University, further explains why we can all appreciate music to a greater degree while under the influence. In his book, The World In Six Songs, he wrote:

“Music combined with marijuana tends to produce feelings of euphoria and connectedness to the music and the musicians. THC — the active ingredient — is known to stimulate the brain’s natural pleasure centers, while also disrupting short-term memory. The disruption of short-term memory thrusts listeners into the moment of the music as it unfolds; unable to explicitly keep in mind what has just been played, or to think ahead to what might be played, people stoned on pot

tend to hear music from note to note. Subconsciously all of the usual processes of expectation formation are still occurring, but consciously, the music creates what many people describe as a time-standing-still phenomenon. They live for each note, completely in the moment.”

Surely there’s a reason why many gamers have found themselves controller in hand, embraced in a cloud of smoke in the early morning hours, or that a perusal around the bedroom of any gamer will often reveal a bong or other cannabis paraphernalia. Perhaps that’s because marijuana can deepen a user’s ability to engage with a game that requires intense focus. Many gamers have reported the sensation of being more tune-in and inside the game while high. This player feels as if they are performing better. It turns out that studies show that marijuana can enhance the mind and the body giving athletes some advantage. From Cannabis and Sports:

Cannabis could be performance-enhancing in sports that require greater concentration… improvement of vision for goalkeepers and muscle relaxation… cannabis smoking reduces anxiety, allowing athletes to better perform under pressure and to alleviate the stress experienced before and during competition.

Trip At The Museum:

Now we’re not telling you to take a trip to your favorite museum completely stoned, micro- dosing marijuana can make enjoying art a full-body experience. With the additional increased dopamine secretions that come from consuming marijuana, the blissful euphoria you experience from THC leads to some pretty heightened levels of ingenuity and imagination. If you don’t normally find museums captivating, take advantage of exploring a museum while buzzed. More than likely, you will be more engaged and will pay more attention to the details of an exhibit. Once you become acutely aware of an artist’s brushstroke, or their utilization of technique, your appreciation for art will skyrocket. More importantly, it can open up your creativity and spur your commitment to access your inner artiste more regularly.

There must be a reason why some of our greatest artists were marijuana enthusiasts. Musicians from Lady Gaga to Bob Marley, to Willie Nelson have sung their praises to marijuana’s ability to help them unlock their creativity. No artist should ever give their personal creative power over to any external source, as that would make them dependant on a substance to create. However, when I do utilize marijuana I like to take advantage of all of its medical benefits, and that includes getting the creative juices flowing. A recent Harvard study revealed that medical marijuana use was linked to improved brain function. According to Arne Dietrich, the author of How Creativity Happens in The Brain, the brain’s prefrontal cortex is central to creativity. This area of the brain is tasked with handling emotions, concentrating, and higher brain functions, such as thought and action. Many successful members of the artistic community utilize cannabis to help them to brainstorm ideas, eliminate mental clutter so they can focus, attack a big task, or quit procrastinating.

Catch Up With A Friend

More than likely any smoker has enjoyed marijuana as a social lubricant. Weed’s puff-puff-pass culture is a long storied history. That said, it can be incredibly liberating to catch up with an old friend while buzzed. Sometimes weed can promote deep thoughts, and there’s no one better to share those with than a friend. Take advantage of the opportunity to share memories and talk about things unsaid. If nothing else, cannabis, a social drug can facilitate real bonding. Conversations under the influence can truly be a free-flowing, one-of-a-kind experience, that friends can look back on and laugh at many years later. If you find yourself too quiet while enjoying marijuana classic conversation starters like never have I ever, or would you rather are sure to unleash a torrent of thought-provoking funny.

Indulge In A Hot Soak

As I mentioned at the outset, for me the ritual of smoking triggers relaxation, so it’s no surprise that another deeply relaxing ritual pairs well with cannabis consumption. Light some candles, turn on some music, add some bubbles or the bath bomb of your choice, and you’ve got a vacation. Allow the steam and the cannabis to envelope you and you will emerge from your bath like a newborn, and deeply relaxed.

Marijuana often provokes deep thoughts, which often is the desired result of meditation. Many people find it difficult to quiet their minds enough to truly enjoy the blissful benefits of meditation. Meditating while buzzed is far from boring, and can be a truly exciting experience, as you allow your mind to drift, and observe your thoughts as if you were watching a movie.

There’s a reason why people who’ve tried cannabis lube are excited proselytizers of its value. Cannabis lube can both facilitate a more relaxed sexual experience it can heighten both partner’s sexual pleasure. Note that cannabis lube can take 20 – 40 minutes to work, and won’t get you high. Many people who’ve tried cannabis lube report that it creates a profound pleasure localized in the privates. After using it for the first time, one female user reported, “I literally laughed out loud because I’d never felt anything as euphoric as that before.”

Another Step Towards Decriminalizing Marijuana In Virgina

Can Virginia Residents Buy Weed from Medical Dispensaries in DC?